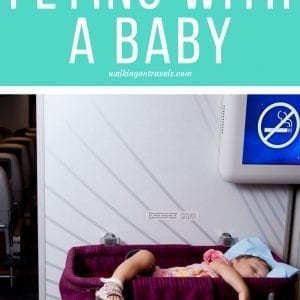 I am an avid traveler; the more passport stamps, the better. And then I got pregnant. My friends said, “You’ll never travel again!” “It’s all over from here.” “Kiss that passport goodbye.” Apparently my friends thought flying with a baby would slow me down.

I looked into the details of baby travel and learned that in the US, children under 24 months old fly free, as long as they are in your lap. I decided to take full advantage of the rule.

By the time my daughter hit her 2nd birthday, she had flown on 11 different trips, with a total of 26 different flights of all sizes and flight times. We boarded 10 seat puddle hoppers in the Caribbean, a 737 overnight to Rome, quick hops from Chicago to Atlanta, California, New Orleans, and Denver. Can anyone say jet lag?

Each flight was unique and even the repeat trips were different because of how quickly they age and change. I learned a lot about flying with a baby and here’s some of what I figured out.

Flying with a 3 month old

My first flight with Avi was at 3 months to Palm Springs, California for a much needed warm up after a bitter cold Chicago winter. We were so nervous leading up to it.

I was actually that mom who made small bags of treats with earplugs and a “Hi, it’s our first time flying, fingers crossed it doesn’t suck for anyone” (turns out our fellow passengers really appreciated the gesture).

Barely able to sit up in my lap, the biggest trick was learning to juggle a nursing baby with a snack tray.

At 3-months-old, Avi nursed on takeoff, snoozed for the bulk of the trip, nursed on landing and barely made a peep. It was deceptively easy, and eased my anxieties enough to try more flights in relatively rapid succession.

The frequency of our coming travel helped make it easy and exciting for Avi. She got used to the process and looked forward to our next trips.

Bring a Change of Clothes for Baby and You

On the return flight from Palm Springs, another baby a few rows ahead of us vomited on take off. I realized there’s really nothing worse than sitting in your baby’s yuck while flying across a continent.

My advice, pack an extra top for mom/dad (or caretaker), as well as an extra outfit for the baby in your carry on bag. Spare blankets and burp rags are great too.

When our daughter was 5-months-old, we flew from Chicago to Atlanta to visit family. It was early October and we had a nice schedule, departure around 11am and a return flight a few days later around 5pm.

About a week in advance of the flight, we started telling Avi that we were going on an adventure and her eyes would light up, focus on us, seeming to ask us for more information.

She was so overstimulated by the new process, the break from routine, and the interest from those around us. She ended up zonking out on departure, was awake for a short time during the flight, and then zonked again on landing.

The key we learned at that point was to tell her of upcoming changes, and explain as it was happening. Babies are constantly learning, and by telling them what’s happening they feel much more settled and steady.

Any time she was unsure, she would look at us, wide eyed, and our explanations really seemed to soothe her.

By 5 months old, she was also very active and engaged in the scenes around her, which meant that my magazine reading days were over.

Flying with a baby is certainly less quiet.

A long day of travel is exhausting. Pack snacks.

At 10-months-old, we took our most grueling trip: a 16 hour travel trip that involved 3 airplanes, 2 continents, lots of delays and a tedious line for customs.

We left the house at 4am for a 7am flight. We woke her slowly, just before departure for the airport, so that she had the least disruption and down time.

After check in, we purchased bagels and bananas and filled up water bottles, preparing for a 3 hour flight which would be punctuated by a 2 hour layover. Snacks were planned pre-flight and a layover meal plan established so that when we landed, we could focus on getting a leg stretch, a nice meal and to the next gate in time.

That lunch was clutch, as the rest of the day fell apart.

Upon arrival in Belize, it took us 2 hours to get through customs, followed by another 3 hour wait for our puddle hopper to the island. We were running low on snacks and the baby’s’ energy.

Thankfully, miscellaneous yogurt squeezies, almonds and Lara bars carried us through the night.

At 15 months, I flew solo to Italy with Avi, who was a developing walker and very interested in the world around her.

The initial departure flight was delayed 7 hours before canceling at 11pm, and rescheduled for a flight 2 days later (turned out to be delayed about 4 hours).

We were exhausted before we even boarded the plane!

Once we finally boarded, the flight had been oversold, which meant there was no adjacent seat for my daughter. I had fed her a steady stream of snacks in the lobby to manage her energy, but once we took off she was overstimulated and fascinated by everything.

She insisted that I carry her, so we walked up and down the aisles for about 2 hours until she finally crashed out in my arms. I had brought along extra baby blankets, and laid them on the floor under the seat in front of me, where I laid her down for about an hour while I in turn took a much needed cat nap of my own.

There wasn’t much sleep for either of us, and she had a bit of a meltdown upon landing.

I held her close, thankful for the baby carrier as I was also struggling with luggage and a purse. I talked to her quietly through deplaning, customs and baggage claim. When we finally got settled into the car, she CRASHED OUT.

Jet lag is another story, but that flight was about as much as I could handle.

Just before her 2nd birthday, we decided to take one last flight to Sonoma to celebrate our wedding anniversary. This was the flight we realized it’s a good thing there’s an age limit on lap babies!

By 2-years-old, most kids are super active, busy little bees and squirmy to boot.

Holding 25 lbs of wiggle on your lap for one hour is challenging and extended flights are exponentially so. The management of food, drinks and arm strength are a non-stop struggle.

There is no way I could manage the tray table at my seat with a toddler in my lap.

Tips for Flying With A Baby:

Managing luggage, coffee, gate details, tickets and food is complicated enough as a traveler; wear your baby through the airport as long as you can.

My carrier of choice for the first year was the JJ Cole Agility carrier. The carrier goes on like a vest, has no buckles or snaps and looks like a swagged layer over your shirt.

The lack of buckles and snaps means that you can wear it through security screening (some airlines request you remove carriers like ergo and similar on take off and landing). Bonus: the fabric panels can act as a nursing cover too!

Get yourself a good backpack or diaper bag that can also act as a day bag for yourself. A diaper clutch has also been key for us. We pop the clutch, filled with wipes and spare diapers, from one purse or backpack to another.

To bring the stroller or not?

We opted for the stroller on most trips. After lots of experimentation with a variety of styles and brands, we love the City Mini stroller.

The stroller is easy to fold, one-handed steering, durable, and it’s also under 20lbs so it can be gate checked.

Does your baby need a car seat?

It depends. We took advantage of the “under 24 months flies free” option, but that “free seat” is mom’s lap.

However, some airlines introduce car seat requirements depending on class of service. For example, on AlItalia, infants do not fly free in 1st class: they are required to have a paid seat of their own, and for that seat to have an FAA approved car seat snapped into it.

Most airlines will also wave the fee for checked carseats if they are needed at your destination.

Tip: Be sure to check the taxi car seat laws of your destination, some states require all passengers to be restrained properly regardless of the vehicle.

When baby is not yet mobile, you can get away with a window seat. By the time you’ve got a budding walker on your hands however, the aisle is where it’s easiest to facilitate movement on long flights.

You want easy access to passports, boarding passes, your phone, a safe spot to stash the pacifier and a bottle.

Sleek leggings, a simple top and a comfortable jacket with pockets are my uniform of choice when flying with a baby.

What can you bring through security and on board?

When you fly with an infant, you get a pass on expressed breastmilk and formula, and sometimes get a pass on bottled water and juice coming through security (be sure to say it’s for the baby’s needs).

We always carry a bunch of snacks. Our favorites include pouches, almonds, carrots, grapes, small oranges and crackers.

Any additional tips that made flying with a baby easier for you? Share below!

Love it? Pin it for later!

Tai Kojro-Badziak is a principal with zpd+a chicago, designer, artist, food hound & unstoppable traveler, sinking in to local culture wherever & whenever she can. She got her first passport at age 2 (Europe!) & has been keeping it active ever since. Interested in the deep culture of a place, she uses her passions for food, art, creativity & the human spirit to connect with people everywhere, learning about local habits & bringing them back to the US. She believes life should be lived richly, using her travels to inform the design process & bringing the textures of travels back to her design work.

45 thoughts on “Tips For Flying With A Baby: What I Learned On 26 Flights”